Skip to Main Content
It looks like you're using Internet Explorer 11 or older. This website works best with modern browsers such as the latest versions of Chrome, Firefox, Safari, and Edge. If you continue with this browser, you may see unexpected results.

This in-depth primer provides guidance on using UNBISNET, ODS, UN-I-QUE, and other tools to identify, understand, and locate UN documents

The only online index that covers older UN documents not yet incorporated by UNBISnet.

selected documents are appended to the respective bibliographic citations incl. SC resolutions (from 1974 on) and GA and ECOSOC resolutions from 1983.

To search AccessUN efficiently for citations to treaties published in the UNTS, treaty researchers should become familiar with the following special features:

AccessUN's "Help" link offers well written and clearly organized search instructions with numerous search examples included. Search fields and search options are described in detail except that no details or examples are given for AccessUN's citations to treaties that were published in the UN Treaty Series.

UseAccessUN as an alternative to using Hein's UNTS citation finder/ EISIL and the UN Treaty Collection Database if you have a treaty citation (e.g. 1577 UNTS 3) but no other information. 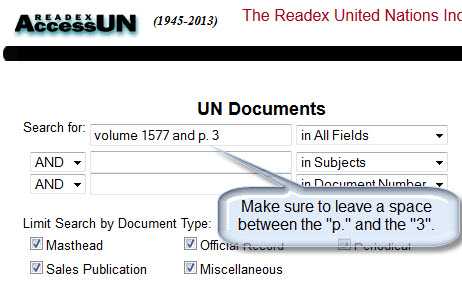 From the main AcessUN search screen enter <volume 1577 and p. 3> [p. + space + number] and search "in All Fields": It will bring up the wanted treaty citation, covering the 1989 Convention on the Rights of the Child. AccessUN does not have the full text but does provide

Has some rare gaps